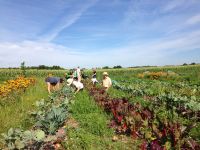 Farm abandonment is a major problem in the U.S., with a report released last week by the U.S. Department of Agriculture (USDA) noting that the country lost approximately 8,000 farms between 2015 and 2016. At the same time, the average farm size has increased, pointing to the decline of small, family-owned farms. For more information, see http://www.wisfarmer.com/story/news/2017/02/22/survey-us-loses-8000-farms-and-million-acres-farmland/98240874/

In this context, the USDA is taking several initiatives to counter farm abandonment, including supporting initiatives to further promote local food and small farmers (let’s recall here that local food is experiencing an interesting growth in the US: in 2015, 167,000 American farms sold food through direct marketing practices, resulting in $8.7 billion in revenue). As an example of such initiatives, the Texas Center for Local Food in Elgin (Texas), along with 13 other local communities, recently received USDA funding to promote rural development by better connecting small farms to supermarkets and restaurants. More information @ https://www.texasobserver.org/local-food-texas/

GIs can be a powerful tool to promote inclusive development in rural areas. In this context, oriGIn initiatives in the U.S. will continue in 2017, with the oriGIn US-based representative starting its work later in March.