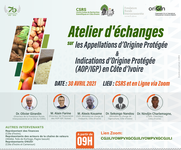 In May, I had the privilege of participating in GIs events in Côte d’Ivoire and Cameroon, on behalf of the oriGIn Executive Committee.

In these countries, which are members of the African Intellectual Property Organization (OAPI, in French), the legislation on GIs is well in place. In Cameroon, the GIs “Poivre de Penja” and “Miel blanc d’Oku” have already been recognized at the OAPI level, while Côte d’Ivoire has been working intensively for the recognition of the GI “Attiéké du Grand Lahou”. Currently, efforts are being deployed in both countries to identify, define and register additional GIs.

Two workshops were organized, in cooperation with the Swiss Center for Scientific Research in Abidjan (Côte d’Ivoire) and the Agricultural Institute in Obala (Cameroon), with the participation of several local stakeholders, including the media. One of the conclusion was the decision to set up, in each country, a national competition for local products, which will be based on the inventories of potential GIs already available. Given the enthusiasm I have seen, I am confident that we will soon be able to count on two new GIs hubs in sub-Saharan Africa. This is good news in the context of multilateral / bilateral GIs agreements, in particular the ratification of the WIPO Geneva Act of the Lisbon Agreement by African countries.