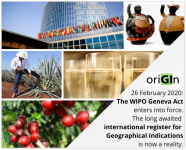 Today’s entry into force of the WIPO Geneva Act on Appellations of Origin and Geographical Indications, three months after the accession of the European Union (EU), represents a milestone for GIs. The establishment of an international registry for all GIs has always been a priority for oriGIn and its members, which have been deeply involved in the process which led to the adoption of the Geneva Act since WIPO launched the Working Group on the development of the Lisbon System back in 2009.

Following six years of discussion in the Working Group, the Lisbon Agreement for the Protection of Appellations of Origin and their International Registration was modernized in 2015 with the adoption of its Geneva Act. Such reform:

The international registry established by the Geneva Act facilitates the protection of Geographical Indications and Appellations of Origin in foreign jurisdictions, thereby increasing legal certainty in international trade for producers, transformers, distributors and consumers. In this respect, the entry into force of the Geneva Act represents a strong message for open and rules-based trade.

oriGIn encourages all WIPO Member States to join the WIPO Geneva Act of the Lisbon Agreement on Appellations of Origin and Geographical Indications.