The Neuville Sweet Corn protected geographical indication  is reserved for sweet corn grown and harvested in Neuville. You have no choice but to travel to get a taste. In Neuville, Quebec, Canada, to be precise, where several producers have a stand along Route 138 that borders the corn fields. Elsewhere, you will only find Neuville sweet corn in rare places like the Grand Marché de Québec. If a merchant from Montreal or Rimouski wants to sell you some, beware! Neuville sweet corn, a protected geographical indication, is only sold in the vicinity of its native territory. Corn grows everywhere, so why do you have to travel across Quebec to taste Neuville’s corn?

Neuville sweet corn is not a corn like any other. It is not genetically modified. Picked just before sale, it is incomparably fresh. It is sweet, firm and juicy. Its seeds are shiny and yellow-ivory in color. As soon as it is cooked, it gives off a sweet smell of butter and hazelnut.

For decades, the corn’s appeal has drawn shuckers from across the province. “When I was a kid, I used to hear about sweet corn. It’s had a long reputation in Neuville, long before I was born,” says corn producer Gaétan Gaudreau of Ferme Degau.

That reputation comes from the land where the corn is grown. We grow the same varieties that can be found elsewhere, such as in Sherbrooke or Ontario,” explains Médé Langlois of Ferme Langlois et Fils, who is also a certified corn producer. But it is the soil of the region that gives it its unique taste.

In addition to its microclimate, which allows for an earlier harvest, the region, which is located along the St. Lawrence River about 35 kilometers west of Quebec City, benefits from sandy soil containing limestone. In addition, the south-facing slope of the fields provides natural irrigation. “We know that taste comes from the earth. It’s like the grape,” continues the Neuvillois. The same grape variety grown in France and California, because of the soil, will be different. For corn, it’s the same thing!

The soil, while playing a big role in the distinctive taste of Neuville Sweet Corn, is not the only ingredient in its success. The know-how developed by the village’s producers to grow it is also a major factor.

Médé Langlois represents the eleventh generation of farmers in his family. When he was eight years old, he started helping with the farm work and was able to observe the work of his parents and grandparents. His family has opened the Cannery Economuseum, which traces the history of the farm and Neuville Sweet Corn.

“We have over 350 years of know-how. The tricks and ways of doing things have been passed down from generation to generation. What I can say is that the corn is harvested young. As for the rest, it’s like a good recipe, we don’t give away the secret ingredients of its success,” warns Médé Langlois, laughing.

It is to defend this reputation and to fight against usurpation that the producers of Neuville grouped together in an association in 1997.

“We had to protect ourselves from fraud,” says Gaétan Gaudreau, who is also president of the Neuville Corn Producers’ Association. For a long time, people had been selling corn from Neuville, when it wasn’t.”
The Association has developed specifications that guarantee the quality and traceability of the product. A logo was also created to allow consumers to recognize the real Neuville sweet corn.

After several years of reflection and work, the Association obtained official recognition of its product in 2017 with the Protected Geographical Indication (PGI) Sweet Corn of Neuville. According to Gaétan Gaudreau, fraud has decreased significantly since the designation has been in place. With seven producers growing about a hundred hectares of Neuville Sweet Corn, production remains on a local scale and struggles to meet the high demand.

The Conseil des appellations réservées et des termes valorisants is the guardian of the authenticity of these distinctive bio-food products legally recognized by the Quebec government. Promoting these products and contributing to their development are important issues in the Council’s latest strategic plan. To learn more, visit https://cartv.gouv.qc.ca/en 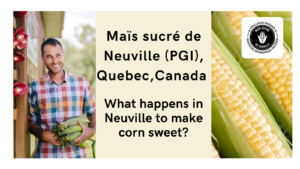